Respondents:- Union of India through the Secretary, Legislative Department & 4 Ors

This writ petition which has been instituted by Lok Prahri, a society registered under the Societies Registration Act, 1860, seeks to challenge the constitutional validity of the amendments made by Parliament to the Salary, Allowances and Pension of Members of Parliament Act, 19541. The petitioner has challenged the validity of the provisions by which Parliament has legislated to provide for pension and for the grant of facilities to former members of Parliament.
Article 106 of the Constitution provides as follows:
"106. Salaries and allowances of members:-Members of either House of Parliament shall be entitled to receive such salaries and allowances as may from time to time be determined by Parliament by law and, until provision in that respect is so made, allowances at such rates and upon such conditions as were immediately before the commencement of this Constitution applicable in the case of members of the Constituent Assembly of the Dominion of India."

The basic postulate of the submission of the petitioner is founded on Article 106 of the Constitution. The foundation of his submission is that when the law was enacted in 1954, Parliament intended to legislate with reference to its power under Article 106 of the Constitution. Under Article 106, the entitlement of Members of either House of Parliament is to receive salaries and allowances as may be determined by Parliament by law. The submission is that since the legislative ambit of the power of Parliament is confined to Members, it cannot comprehend a former member of Parliament, and salaries and allowances would not include a pensionary benefit.
This submission which has been urged before the Court was dealt with in a judgment of a Constitution Bench of the Supreme Court in Common Cause (supra). The constitutional validity of Section 8A, which was introduced by a legislative amendment of 1976 to provide for the grant of pensionary benefits to former members, was specifically in issue before the Constitution Bench. The submission before the Supreme Court was in the same terms as the submission which has been urged before this Court on the above aspect. For convenience of reference, it would be material to note the record of submissions as contained in the decision of the Supreme Court:
"Article 195 makes similar provision in respect of the Members of Legislative Assemblies and Legislative Councils of the States. It is pointed out by Mr. Prashant Bhushan that whereas legislators are thereby entitled to salaries and allowances, there is no provision in regard to the payment of pension to them. The provisions of these Articles are contrasted by learned counsel to the provisions of Articles 125 and 221. Article 125(2) says that Judges of the Supreme Court shall be entitled to such privileges and allowances and to such rights in respect of leave of absence and pension as may from time to time be determined. There is a similar provision in regard to High Court Judges in Article 221. Our attention is also drawn to Article 148 which makes reference to the pension of a Comptroller and Auditor General. Learned counsel's argument is that where pension is to be paid to a constitutional functionary, the Constitution makes specific provision and that, therefore, in not making such specific provision in regard to Members of Parliament under Article 106, it must be assumed that they are not entitled to receive pension."

The writ petitions before the Supreme Court were dismissed as being devoid of merits. Once that was the position, the argument on the ground of a violation of Article 14 must, insofar as this Court is concerned, be treated as being concluded by the judgment in Common Cause. Nonetheless, for the sake of completeness, we have dealt with the submissions of the petitioner and have found no substance.
The petitioner has sought to challenge the provisions by which Members of Parliament have been granted travel facilities which extend to the spouse of a Member and to former members. Section 6B (1) (ii) allows a Member of Parliament free travel by any railways in India "in first class air-conditioned or executive class" with the spouse, if any, of the member from any place in India to any other place. Sub-section (2) which contains a non-obstante clause allows a spouse of a Member to travel any number of times, by railways from the usual place of residence of the Member to Delhi and back.
In these proceedings which involve a challenge on the ground of a violation of Article 14 of the Constitution, the Court has to be careful enough not to delve into the legislative wisdom of such a measure. On the contrary, Parliament in enacting the law has taken a robust view of the matter by taking notice of the fact that a Member of Parliament must be required to travel together with her or his spouse. Members of Parliament lead stressful lives. Parliament was entitled in its legislative judgment to form the view that the effective discharge of duties as a Parliamentarian would envisage the provision of facilities necessary for the efficient discharge of those duties. Article 14 does not prohibit such a legislative assessment or the formation of a legislative judgment of that nature. We may also note that clause (a) of sub-section (2) of Section 6B provides for travel from the usual place of residence of the Member to Delhi, a journey which Parliament has realistically assumed, would be required to be undertaken for the effective discharge of duties.
The provision for a family pension has been brought in by way of an amendment introduced by the insertion of Section 8AC. Sub-section (1) of Section 8AC stipulates that on the death of a member during the term of office, the spouse, if any, of such a member or a dependent shall be paid, during the remaining period of life and so long as a dependent continues to be a dependent, one-half of the pension to which a Member of Parliament would have been entitled, had he retired. Under sub-section (2), family pension is also payable to the spouse or a dependent of a person who was a member of either House, even prior to the commencement of the Amending Act of 2006.
The introduction of a provision for the grant of a family pension is in the nature of a social welfare measure intended to provide a sense of security to a spouse or dependent of a member of Parliament who has died. The expression 'dependent' has been defined by Section 2 (aa). In our view, the grant of family pension to the spouse or dependent of a former member of Parliament is a matter of legislative policy. There is no constitutional prohibition on Parliament adopting such a measure of social security for its former members. The nature and extent of payment are not such as would implicate the vice of arbitrariness under Article 14.
For these reasons, we have come to the conclusion that the petition is lacking in merit. The petition shall accordingly stand dismissed. However, there shall be no order as to costs.
Order Date :- 20.4.2016
AHA
(Dr D Y Chandrachud, CJ) 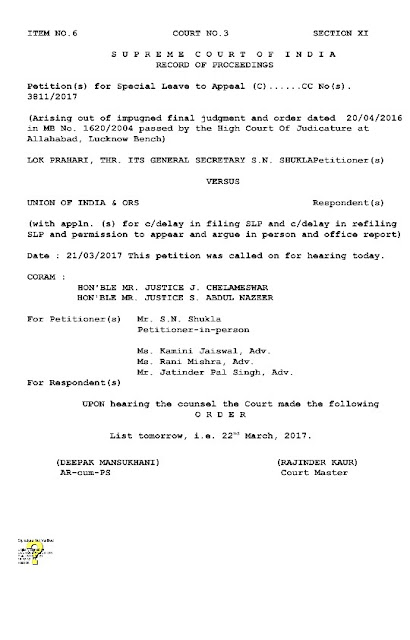 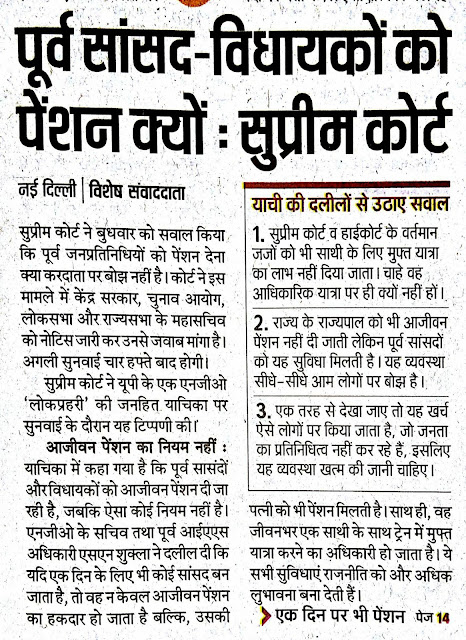