Hon'ble Vikram Nath,J.
Hon'ble Daya Shankar Tripathi,J.
Heard Sri Gyan Prakash, A.S.G.I. appearing for the petitioners and Sri Basudev Shukla, learned Counsel appearing for respondent Nos. 1 and 2.
The Tribunal by the impugned order allowed the original application filed by respondent Nos. 1 and 2 and has directed the petitioners (the respondents therein) to re-consider the case of the respondent No.2 for compassionate appointment afresh within three months after setting aside the order passed by the authority rejecting the claim for compassionate appointment. Aggrieved by the same this petition was filed by the Department. While entertaining the writ petition this Court passed an interim order on 25th March, 2015, the same is reproduced below:-
"Issue notice to respondent nos. 1 and 2 returnable within next 12 weeks.
On the matter being taken up today from the side of petitioners it has been argued that the death in question has taken place on 3 August 1999; application in question has been moved for grant of compassionate appointment on 18 February 2008 and, thereafter, same has been considered on 27 May 2011 and turned down on 2 June 2011 and petitioners' submission before this Court is that object of providing compassionate appointment is to save the family from immediate financial crisis that has occurred on account of death of bread earner of the family and here in the present case application in question was belated one and coupled with this the financial condition of the family has not at all been adverted to and reliance has been placed on circular dated 26 July 2012 which is not at all in existence on the date when decision has taken place. Petitioners submit that in this background the decision that has been so taken for providing compassionate appointment after more than 15 years of the date of death, in the facts of the case, be not at all approved of by this Court.
Prima facie the arguments so advanced before this Court appears to have some substance and requires consideration of this Court, in view of this, till the next date of listing the effect and operation of the impugned order dated 25 March 2014 passed by the Central Administrative Tribunal, Allahabad Bench, Allahabad, is directed to be kept in abeyance."

The reasons given in the interim order are not disputed by the learned counsel for the respondent Nos. 1 and 2. Thus, the admitted facts which emerge are that father of respondent No.2 and husband of respondent No.1 died on 3rd August, 1999. After waiting for about 8 and half years application for compassionate appointment was moved on 18th February, 2008. The said application has been rejected by the Department for various reasons. The Tribunal it appears was swayed by the fact that the point rating system was not considered in the case of the applicant therein and therefore remitted the matter for a fresh decision.
We are of the considered view that the scheme and the purpose of providing compassionate appointment is to provide immediate financial aid to the family whose sole bread earner had died. It is not in the scheme of the compassionate appointment that one member of the deceased family is to be provided with the job at the convenience and appropriate opportunity. If the respondent No.2 was a minor at the relevant time, his mother could have applied for compassionate appointment and then she would have helped the family financially. If the family could survive for 8 years without any financial aid on the basis of the pension being paid to the family and also the terminal dues paid and otherwise whatever may be the income of the family then the very purpose of the compassionate appointment stands defeated.
We are thus, of the view that the claim made by the petitioner was not a genuine claim for compassionate appointment but was for an entry into service without facing the open market selection which otherwise has been held to be violative of Article 14 of the Constitution.
We are accordingly of the view that the order of the Tribunal directing for reconsideration would be a futile exercise.
The writ petition succeeds and is allowed. The impugned order dated 25.03.2014 passed by the Tribunal is set aside and the Original Application is dismissed.
Order Date :- 6.3.2017
Ashutosh 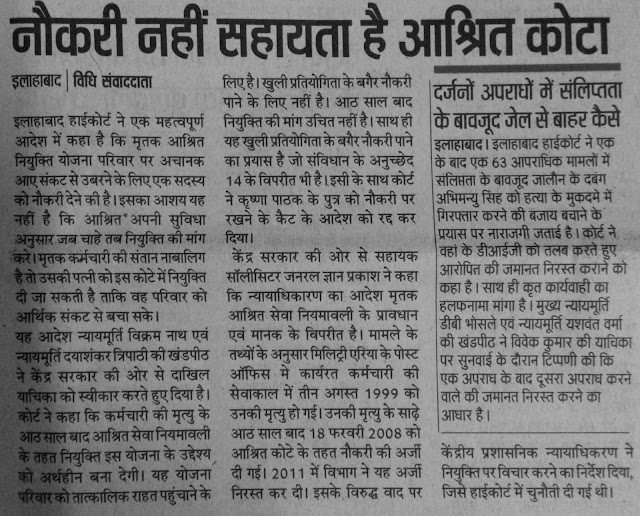