1.    Leave granted.  The question raised in  this  appeal  is  whether  the
High Court was justified in setting aside the award of the  Motor  Accidents
Claims Tribunal, Kolkata only on the ground that the Tribunal did  not  have
the territorial jurisdiction.

2.    On 7th May, 2008, the  deceased  Diganta  Sardar,  aged  26  years,  a
school teacher, unmarried son of the appellant was hit  by  Bus  No.WB/15-A-
4959 insured with the respondent company at Hoogly, in  the  State  of  West
Bengal and died.  He was travelling on motor cycle of his  colleague,  Uttam
Samui as a pillion rider.  The appellant filed an application under  Section
166 of the Motor Vehicles Act, 1988 (“the Act”) for compensation before  the
Tribunal at Kolkata.

3.    Rash and negligent driving by  the  driver  of  the  bus  having  been
established, the Tribunal, applying the multiplier of 13 on account  of  age
of the appellant being 47 years, and taking into account the income  of  the
deceased and other relevant factors, fixed  compensation  of  Rs.16,12,200/-
with interest at the rate of 6% p.a.  from  the  date  of  filing  of  claim
petition vide its Award dated 7th February, 2012.

4.    The respondent company preferred an appeal before the  High  Court  on
the only ground of lack of territorial jurisdiction of  the  Tribunal.   The
objection of the respondent was that the accident took place at  Hoogly  and
the claimant resided at Hoogly.  Office of the respondent being  at  Kolkata
did not attract jurisdiction of the Kolkata Tribunal.  Reliance  was  placed
on the decisions of this Court in Union of  India  vs.  G.S.  Grewal[1]  and
Jagmittar Sain Bhagat vs. Director, Health Services, Haryana[2]  apart  from
the High Court judgments.  The appellant  supported  the  award  by  placing
reliance on judgment of this Court in Mantoo Sarkar vs.  Oriental  Insurance
Company Limited[3]  apart from other judgments.

5.    The High Court upheld the objection of the respondent and allowed  the
appeal  of  the  respondent  company  and  directed  refund  of  the  amount
deposited/paid, if any, to the respondent company.  It was observed :
“In the instant case admittedly the accident took  place  in  Hooghly.   The
claimant, as evident from the cause title, resides at  Hoogly.   The  owner,
the respondent, too resides at Hooghly.   Hooghly, no doubt, is  beyond  the
territorial jurisdiction of the Tribunal at Kolkata.  The  argument  of  the
respondent-claimant that the Kolkata Tribunal exercises  jurisdiction  since
the regional  office  of  the  insurance  company  is  situated  within  its
territorial limits cannot be accepted  as  the  last  option  under  section
166(2) cannot be construed to mean the residential address  of  the  company
as a company can have a business or an office address and not a  residential
address.   Therefore,  the  Tribunal  at  Kolkata  had  no  jurisdiction  to
entertain the claim petition.  In this regard we follow  the  principles  of
law laid down in New India Assurance Company Limited vs. Kustiswar  Pramanik
(supra) [2010(1) T.A.C. 405 (Cal), in Nirmala  Devi  Agarwal  (supra)  [2013
(3) CLJ (Cal)] and in the unreported judgment delivered on 18th  July,  2012
in FMA 724 of 2008 with C.O.T. 22 of 2008 (The  New  Indian  Assurance  Col.
Ltd. vs. Silpi Dutta & Ors.) and we respectfully disagree with the  judgment
in FMA 1454 of 2013 (National Insurance  Company  Ltd.  vs.  Alpana  Jana  &
Ors.)”.

6.    We have heard learned counsel for the parties.
7.    Learned counsel for the appellant submitted that the  High  Court  was
in grave error in holding that  the  Kolkata  Tribunal  could  not  exercise
jurisdiction on the ground that registered office of the  insurance  company
was within its territorial limits. Jurisdiction was available under  Section
166(2) if the defendant/respondent in a claim petition was  residing  within
the jurisdiction of the Tribunal.  The residence in  the  case  of  juristic
person included its Principal office.  In any case, the view  taken  by  the
High Court is directly in conflict with the law laid down by this  Court  in
Mantoo Sarkar (supra) under which the High Court  could  interfere  in  such
cases only if there was failure of justice.  The decisions of this Court  in
G.S. Grewal and Jagmittar Sain  Bhagat  have  no  application  to  the  fact
situation
at hand.

8.    Learned  counsel  for  the  respondent  company  on  the  other  hand,
supported the view taken by the High Court and submitted that the  place  of
residence within the jurisdiction of the Tribunal under  Section  166(2)  of
the Act could not mean the place of business.  He sought to distinguish  the
view taken by this Court in Mantoo Sarkar (supra).


9.    The question  for  consideration  thus  is  whether  the  Tribunal  at
Kolkata had the jurisdiction to decide the claim application  under  Section
166 of the Act when the accident took  place  outside  Kolkata  jurisdiction
and  the  claimant  also  resided  outside  Kolkata  jurisdiction,  but  the
respondent being a juristic person carried on business at Kolkata.   Further
question is whether in absence of failure of justice, the High  Court  could
set aside the award of the Tribunal on the ground  of  lack  of  territorial
jurisdiction.

10.   In our view, the matter is fully covered by decisions  of  this  Court
in Mantoo Sarkar (supra).  It will be  worthwhile  to  quote  the  statutory
provision of Section 166(2) of the Act :

Provided that where no claim for compensation under Section 140 is  made  in
such application, the application shall  contain  a  separate  statement  to
that effect immediately before the signature of the applicant.”


11.   In Mantoo Sarkar (supra),  the  insurance  company  had  a  branch  at
Nainital.   Accident  took  place  outside  the  jurisdiction  of   Nainital
Tribunal. The claimant remained in the hospital at Bareilly  and  thereafter
shifted to Pilibhit where he was living for a long time.   However,  at  the
time of filing of the claim  petition  he  was  working  as  a  labourer  in
Nainital District.  The High Court took the view that Nainital Tribunal  had
no jurisdiction and reversed the view taken by the Tribunal  to  the  effect
that since the  office  of  the  insurance  company  was  at  Nainital,  the
Tribunal had the jurisdiction.  This Court reversed the  view  of  the  High
Court.  It was held that the jurisdiction of the  Tribunal  was  wider  than
the civil court.  The Tribunal could follow the provisions of Code of  Civil
Procedure (CPC).   Having regard to Section 21 CPC,  objection  of  lack  of
territorial  jurisdiction  could  not  be  entertained  in  absence  of  any
prejudice.  Distinction was required to  be  drawn  between  a  jurisdiction
with regard to subject matter on the one hand and that  of  territorial  and
pecuniary jurisdiction on the other.  A  judgment  may  be  nullity  in  the
former category, but not in the later.   Reference was also made to  earlier
decision of  this  Court  in  Kiran  Singh  vs.  Chaman  Paswan[4]   to  the
following effect :

“With reference to objections relating to territorial jurisdiction,  Section
21 of the Civil Procedure Code enacts that no  objection  to  the  place  of
suing should be allowed by an appellate or revisional  court,  unless  there
was a consequent failure of justice. It is the same principle that has  been
adopted in  Section  11  of  the  Suits  Valuation  Act  with  reference  to
pecuniary jurisdiction. The policy underlying Sections 21  and  99  CPC  and
Section 11 of the Suits Valuation Act is the same, namely, that when a  case
had been tried by a court on the merits and  judgment  rendered,  it  should
not be liable to be reversed purely on  technical  grounds,  unless  it  had
resulted in failure of justice, and the policy of the legislature  has  been
to treat objections  to  jurisdiction  both  territorial  and  pecuniary  as
technical and not open to consideration by an appellate court, unless  there
has been a prejudice on  the  merits.  The  contention  of  the  appellants,
therefore, that the decree and judgment  of  the  District  Court,  Monghyr,
should be treated as a nullity cannot be sustained under Section 11  of  the
Suits Valuation Act.’ ”

12.   We are thus of the view that in the face of judgment of this Court  in
Mantoo Sarkar (supra),  the High Court was not justified  in  setting  aside
the award of the Tribunal in absence of  any  failure  of  justice  even  if
there was merit in the plea of lack of territorial jurisdiction.   Moreover,
the fact remained that the insurance company which was the  main  contesting
respondent had its business at Kolkata.

13.   Reliance placed  on  decisions  of  this  Court  in  G.S.  Grewal  and
Jagmittar Sain Bhagat is misplaced.  In G.S. Grewal, the subject  matter  of
dispute was not  covered  by  the  definition  of  “service  matters”  under
Section 3(o) of the Armed Forces Tribunal Act, 2007 and on that  ground,  it
was held that the Armed Forces Tribunal had no jurisdiction in  the  matter.
Thus, it was a case of  inherent  lack  of  jurisdiction  over  the  subject
matter.  Similarly  in  Jagmittar  Sain  Bhagat,  the  claimant  before  the
Consumer Protection Forum was  found  not  be  a  “consumer”  under  Section
2(1)(d) of the Consumer Protection Act, 1986 and on that  ground  the  order
of the consumer forum was held to be without jurisdiction.  The  said  cases
did not deal with the issue of territorial jurisdiction.

14.  The provision in question,  in  the  present  case,  is  a  benevolent
provision for the victims of accidents of negligent driving.  The  provision
for territorial jurisdiction has  to  be  interpreted  consistent  with  the
object of  facilitating  remedies  for  the  victims  of  accidents.   Hyper
technical approach in such matters can hardly be appreciated.  There  is  no
bar to a claim petition being filed at a place where the insurance  company,
which is the main contesting parties in such cases, has  its  business.   In
such cases, there is no prejudice to any party.   There  is  no  failure  of
justice.  Moreover, in view of categorical decision of this Court in  Mantoo
Sarkar (supra), contrary view taken by the High Court cannot  be  sustained.
The High Court failed to notice the provision of Section 21 CPC.

15.   Accordingly, we allow this appeal, set aside the impugned judgment  of
the High Court and restore the award of the Tribunal. 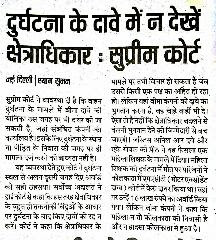