The petitioner was appointed as a clerk in the Public Works Department1 of the State Government on 5 May 1999 and is in continuous service since then. On 11 January 2010, he was promoted as senior clerk on which post he continues to work. Presently, he is posted in the provincial division of the PWD at Firozabad.
The State Government notified on 1 January 2015, the U.P. Lok Nirman Vibhag Avar Abhiyanta (Civil) (Group-C) Service Rules 20142 under Article 309 of the Constitution. Rule 5 specifies the source of recruitment for filling up the post of Junior Engineer (Civil). 95% of the posts are to be filled up by direct recruitment through the Public Service Commission. The remaining 5% of the posts are to be filed up by promotion from amongst substantively appointed Group-C employees of the department who have obtained the qualifications specified in Rule 8 after obtaining the permission of the department and have completed 10 years of substantive service on the first day of the year of recruitment. Rule 8 specifies the educational qualifications required to be possessed by a candidate for appointment as a Junior Engineer (Civil). The prescribed educational qualifications are High School Certificate Examination or equivalent along with a 3 year diploma in Civil Engineering awarded by the Board of Technical Education or a qualification equivalent thereto.
On 8 January 2015, the Senior Staff Officer in the PWD addressed a communication to all the Regional Chief Engineers requiring them to forward details of such Grade-C employees in the department who had obtained a diploma in civil, electrical or mechanical engineering with the permission of the department. On 14 January 2015, the Executive Engineer of the Provincial Division, Firozabad forwarded the name of the petitioner to the Superintending Engineer. A further communication was issued on 20 February 2015 by the Senior Staff Officer in pursuance of which the Executive Engineer of the Provincial Division forwarded details of the petitioner under cover of a letter dated 28 February 2015. The office of the Engineer-in-Chief prepared a list of Group-C employees eligible for consideration for promotion on 22 May 2015 in which the name of the petitioner figured at serial no. 6. It appears that the office of the Engineer-in-Chief sought a clarification from the State Government on 29 May 2015 on various issues, among them being whether candidates who had obtained a degree/diploma prior to appointment would be eligible for consideration for promotion. The State Government by its communication dated 2 September 2015 directed that action be taken under Rule 5 (2) of the Rules. In the meantime, by a circular dated 12 June 2015, the office of the Engineer-in-Chief notified a provisional seniority/eligibility list to which objections were invited. Thereafter, a final seniority/eligibility list was issued on 9 September 2015 in which, the name of the petitioner has not been included.
The petition contains a categorical statement - not denied in the counter affidavit - that the petitioner possesses a 3 year diploma in Civil Engineering; that he was substantively appointed in the clerical cadre and has completed 10 years service as on 1 July 2015. The submission of the petitioner is that Rule 5 of the Rules, insofar as it excludes such members of the clerical cadre who possessed a diploma at the time of their initial appointment in the clerical cadre from consideration is arbitrary and violative of Article 14. According to the petitioner, there is no reason or basis to exclude in service candidates such as himself, who had obtained the required diploma qualification prior to their entry in service.
In pursuance of an order passed by this Court on 18 November 2015, a counter affidavit has been filed by the Principal Secretary in the PWD in which, it has been stated as follows:
"That the petitioner has not obtained diploma in civil engineering with the prior permission of the department hence in accordance with Rule 5(2) of the Rules, 2014 is not eligible for promotion. Rule 5 (2) of the U.P. Public Works Department Junior Engineer (Civil) (Group-C) Service Rules, 2014 specifically provides that in order to be eligible for promotion under 5% quota, a candidate must have completed 10 years of service on group C post and have completed diploma in civil engineering after the prior approval/permission of the department. Petitioner had obtained diploma in civil engineering prior to his appointment in group C post and without approval/permission of the department, hence is not in accordance with Rules, 2014 and is not entitled for promotion as per the policy of the government."


Rule 5 provides for 95% of the posts being filled up by direct recruitment. The remaining 5% of the posts are to be filed up by promotion from in service candidates who were substantively appointed as Group-C employees. The condition is that such candidates must fulfill the required educational qualifications as prescribed in Rule 8 after obtaining the permission of the department and should have completed 10 years of substantive service on the first day of the year of recruitment.
In our view, the requirement that a candidate should have fulfilled the required educational qualifications as prescribed by Rule 8 after obtaining the permission of the department covers those in service candidates who have acquired the qualifications during their employment with the State Government. This is intended to ensure that a candidate who is duly employed with the State obtains the educational qualifications only after seeking and obtaining the permission of the prescribed authority. Obviously, the object and purpose is not to exclude from consideration in service candidates who have already obtained educational qualifications prescribed prior to their date of entry in service. In other words, Rule 5 (2) is not intended to act as an exclusion of in service candidates who otherwise fulfill the requirement of holding the prescribed qualifications, where the qualifications had already been acquired prior to entry in service. If the Rule is construed in the manner it has been interpreted by the State Government, it would become manifestly arbitrary since it would operate to exclude in service candidates who fulfill all the required norms including the prescribed qualifications, only on the ground that the qualifications had been obtained prior to the date of entry in service. This is evidently not the object and purpose which is sought to be achieved by the Rule.
Hence, as we have interpreted the Rule, it would not exclude the petitioner from being considered for promotion merely on the ground that he had not obtained the educational qualifications prescribed with the permission of the department. There was no occasion for the petitioner to obtain the permission of the department for the simple reason that he had acquired a three year diploma in 1988, much prior to his appointment in the clerical cadre of the PWD in 1999. We, consequently, hold that the petitioner shall not be excluded from the eligibility list for the reasons which had weighed with the authorities. We clarify that it would be open to the authorities to duly verify that the petitioner does fulfill the prescribed qualifications. Subject to this verification and the petitioner meeting the required norms as prescribed in Rule 5 (2), the name of the petitioner shall be included in the eligibility/select list in accordance with law. This exercise shall be completed within a period of one month from the date of receipt of a certified copy of this order. In the view which we have taken in interpreting Rule 5 (2), it has not been necessary for the Court to strike down the provisions contained in the Rule.
The petition is, accordingly, disposed of. There shall be no order as to costs.
Order Date :- 4.1.2016
RK
Yashwant Varma, J
Dr D Y Chandrachud, CJ 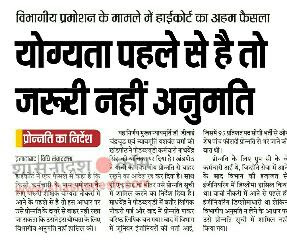