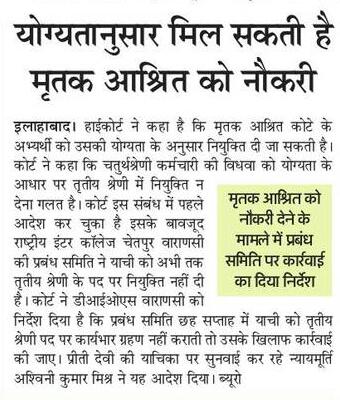 HIGH COURT OF JUDICATURE AT ALLAHABAD
Court No. - 16
Case :- WRIT - A No. - 6764 of 2018
Petitioner :- Priti Devi
Respondent :- State Of U.P. And 4 Others
Counsel for Petitioner :- Aishwarya Kumar Singh,Rajesh Kumar Singh
Counsel for Respondent :- C.S.C.,Jagriti Singh
Hon'ble Ashwani Kumar Mishra,J.
Petitioner's husband was employed as class IV employee in a recognized and aided institution known as Ram Baba Inter College, Sidhaura, Varanasi, who died� on 17.07.2017. An application for grant of compassionate appointment has been filed by his wife and the same has been processed in accordance with the regulation 107 of Chapter III of the U.P. Intermediate Education Act, 1921.
The District Inspector of Schools, Varanasi has passed an order on 30.10.2017 directing the Committee of Management of respondent no. 4, institution to issue an appointment order to the petitioner on the post of Assistant Clerk. Repeated reminders have been issued by the District Inspector of Schools, Varanasi but the petitioner has not been allowed to join. This petition accordingly has been filed for a direction upon respondents to allow the petitioner to work and to receive salary.
Sri Jagriti Singh has appeared on behalf of respondent no. 4 and has stated that the claim of petitioner is disputed on following grounds :-
"(I) That the deceased husband of petitioner was class IV employee and, therefore, appointment could not offered to the petitioner on class III post.
(II) It is stated that the Committee of Management is entitled to fill up the vacant post by making selections and the Inspector is not justified in placing the petitioner in the institution of respondent no. 4."
Reliance has placed upon the decision of the Apex Court in the case of State of Haryana and others vs. Vipin Kumar, AIR 2002 Supreme Court 2867 in order to contend that the appointment on compassionate ground can be issued on a post lower than what was prossessed by the deceased employee.
I have heard the learned counsel for the parties and perused the record.
The appointment to Class III and Class IV posts in the recognized intermediate college is to be made in accordance with the regulations 101 to 107 of regulations framed in the U.P. Intermediate Education Act, 1921. By way of amendment made in the regulations, all class IV appointment in any such institution is now required to be outsourced but there is an exception for the purpose of grant of compassionate appointment. Compassionate appointment is to be made with reference to regulation 103 as per which appointment is to be made depending upon the qualification possessed by the dependent of the deceased employee. There is no Bar in the regulations which restricts such engagement to post held by the deceased or below it. Once, the qualification possessed by the petitioner has been found as being valid for appointment to a class III post, and such an appointment has been made, the Committee of Management cannot resist joining of the petitioner on the ground as is alleges before this Court.
The Judgment in the case of State of Haryana and others (supra) will not apply to the facts of the present case, inasmuch as, the Hon'ble Supreme Court while dealing with rules framed by the State of Haryana, which specifically provided that compassionate appointment could be made only on a post lower than the post held by the deceased observed that the appointment could be made on a post below the post held by the deceased. No such provision exists here and, therefore, the judgment of the Apex Court will have no applicability.
It is further not in issue that a vacant post exist in respondent no. 4 institution and petitioner is qualified for the post. The Committee of Management, therefore, cannot insist that it would make recruitment itself and would not allow joining to a candidate appointed on compassionate ground. Repeated reminders have been sent by the Inspector but till date the petitioner has not been allowed to join.
In such circumstances, the writ petition is disposed of with a direction upon the Inspector to ensure joining of the petitioner forthwith, failing which it shall be open for him to take appropriate measures as are contemplated in law, against the Committee of Management, so as to ensure the joining of the petitioner within a period of six weeks from today. The steps to be taken shall include an order of single operation to be passed, in accordance with law.
Order Date :- 22.3.2018
sailesh
Posted by प्राइमरी का मास्टर 2