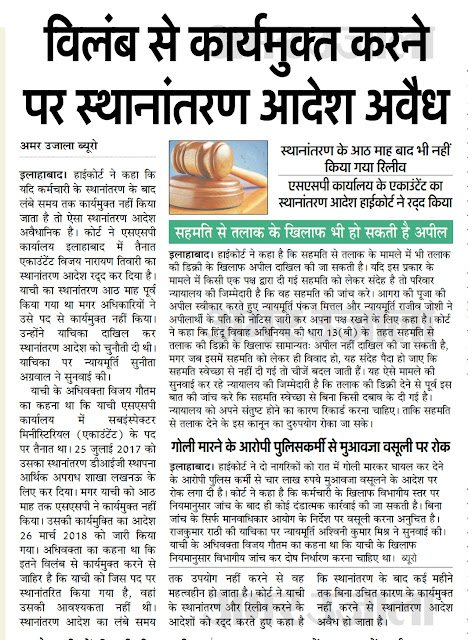 HIGH COURT OF JUDICATURE AT ALLAHABAD
Court No. - 36
Case :- WRIT - A No. - 9053 of 2018
Petitioner :- Vijay Narain Tiwari
Respondent :- State Of U.P. And 12 Others
Counsel for Petitioner :- Archana Singh,Vijay Gautam
Counsel for Respondent :- C.S.C.
Hon'ble Mrs. Sunita Agarwal,J.
Supplementary affidavit filed today is taken on record.
The transfer order dated 25.07.2017 is being sought to be given effect to by passing a relieving order dated 26.03.2018. The petitioner is seeking quashing of both the orders on the grounds that the petitioner did not make any request for stay of his transfer. The respondent authorities did not relieve the petitioner and as such he could not join the new place of posting. There is no justification for giving effect to the transfer order after a period of approximately eight months.
Learned Standing Counsel does not dispute to the position that the petitioner has been transferred with immediate effect vide order dated 25.07.2017 pursuant to the decision taken by the Police Establishment Board dated 24.07.2017 but he has not been relieved since then.
In the similar fact and circumstance, this Court in Service Single No.22320 of 2017 (Virendra Pal Singh Vs. State of U.P. & others) has disposed of the writ petition with the following observations:-
An order of transfer has been passed on 11.5.2016, which is being given effect to by passing relieving order dated 23.7.2017.
Learned counsel for the parties do not dispute that facts of the present petition are identical to one occurring in Service Single No.10584 of 2017, which has been disposed of on 12.5.2017. The order dated 12.5.2017 is extracted herein below:-
"Heard learned Counsel for petitioners and the learned Standing Counsel.
Petitioners have challenged the impugned relieving order dated 23.04.2017 passed by the Senior Superintendent of Police, Hardoi (opposite party no.4) in pursuance to the transfer order passed on 09.07.2014,
It has been submitted by learned Counsel for petitioners that petitioners were transferred in the years 2014 and 2015 and now after lapse of 2-3 years, the aforesaid impugned relieving order has been passed by opposite party no.4.
Learned Standing Counsel, on the basis of the instructions, has admitted that definitely, the impugned reliving order has been passed too late and, therefore, fresh orders will be passed with respect to the petitioners and other persons who have not join their services in pursuance to the transfer order passed in the years 2014 and 2015.
Admittedly, there is a considerable long delay in passing the impugned and no cogent and justifiable reasons have been given for not acting upon the transfer order immediately when they were passed. Therefore, the impugned order passed in respect of petitioners is legally not sustainable and the same is hereby quashed.
It is open for the opposite parties to transfer the petitioners, if exigency of service so requires, in accordance with law.
With the aforesaid observations/directions, the writ petition is disposed of finally"
Since the issue involved in the present matter is identical, the present writ petition is also disposed of on the same terms."
This Court is of the view that the petitioner herein is also entitled for the same relief.
The writ petition is disposed of on the same terms.
Order Date :- 4.4.2018
Himanshu
Posted by राम कृष्ण मिश्र (रिक्की)