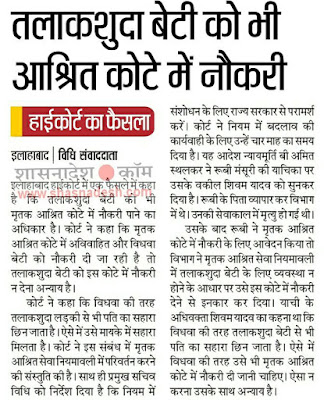 Respondent :- State Of U.P. And 4 Others

Sri Mata Prasad, learned Additional Chief Standing Counsel for the respondents has no objection if the impleadment application is allowed.

Let the necessary impleadment be carried out during the course of the day.

The petitioner is seeking quashing of the order dated 27.07.2015 whereby her claim for appointment on compassionate ground has been rejected on the ground as per the Uttar Pradesh Recruitment of Dependents of Government Servants (Dying-in-Harness) Rules, 1974 under the definition of family do not contemplate a divorced daughter as a member of the deceased employee's family.

Sri Shivam Yadav, learned counsel for the petitioner contended that Rule 2 (C) (III) includes unmarried and widowed daughters within the definition of the family of the deceased Government Servant. He submits that if a widowed daughter who nevertheless continues to belong to the family of her in-laws, has been given a definition of deceased family member; then why not a divorced daughter, inasmuch as, she neither belongs to her in-laws family after her divorce and if she is not considered as a member of the family of the 'deceased Government servant' who is her father then she would have no place to go at all and would be on the road.

The submission of the learned counsel for the petitioner has substance. It is noticed that while the benefit of compassionate appointment has been extended by the Dying-in Harness Rules, 1974 to unmarried and widowed daughters in spite of the fact that a widowed daughter also belongs to family of her in-laws and the mere fact that her husband dies does not make her entitle for the compassionate appointment whereas by the same logic the benefit of compassionate appointment has not been extended to a divorced daughter who upon the cessation of a marriage no longer belong to her husband and her in-laws and in such circumstances she cannot be said to be belonging to the family of her natural father, who may have been a deceased Government servant.

Sri Mata Prasad, learned Additional Chief Standing Counsel however, submits that the Rule 2 (C) (III) of the Dying-in-Harness Rules, 1974 do not contemplate a divorced daughter as belonging to the family of her natural father who may have been the deceased Government servant and therefore, the benefit of compassionate appointment cannot be extended to a divorced daughter. Learned Additional Chief Standing Counsel further submits that the Courts cannot direct the Government to legislate upon a particular point. The submission of the learned A.C.S.C. cannot be disputed as the law in this regard is already settled by several decisions of this Court and the Supreme Court.

The submission of the State appears to be quite wrath and incongruous with the Rule granting compassionate appointment. If the benefit of the compassionate appointment can be given to an unmarried and widowed daughter, there appears to be absolutely no reason as to why the same benefit cannot be extended to a divorced daughter who does not belong to the family of her in-laws after the divorce and her father after the cessation of her marriage.

No doubt there is a serious lacuna in the Rules itself and the law is quite clear that the Court cannot give any direction to the State to legislate on a particular point.

Nevertheless, considering the humanitarian grounds the matter requires consideration by the State Government. Divorce in itself cannot be treated to be a stigma to a women who has to face such an unfortunate and peculiar situation that she has to undergo a divorce. But that itself should not deprived her of a benefit of a compassionate appointment at par with a widowed daughter.

Considering the humanitarian factors involved; this writ petition is disposed of with a direction to the newly added respondent no.6-Principal Secretary Law/Legal Remembrancer, U.P. Shashan, Lucknow (U.P.) who shall take necessary steps in the matter in consultation with the State Government in accordance with law in the light of the observations made above within a period of four months from the date of receipt of a certified copy of this order.