In the meeting of Chief Electoral Officers held on 26th October, 2010, the issue of
deployment of BLOs, among other issues, was discussed in detail. It was observed that
despite the Commission’s clear instructions that one BLO should be made responsible for
only one part of Electoral Roll, a number of BLOs still continue to have charge of two or more
than two polling booths. In this connection, the Commission directed that immediate efforts
should be made to draft more staff as BLO to ensure that one BLO remains in-charge of only
one part. The Commission has further directed that the BLO should be a government employee who is enrolled as an elector in the part of Electoral Roll, which is under his charge. A suggested list of categories of government/semi government employees in addition
to teachers who can be appointed BLO is given below:-
1. Anganwadi workers,
2. Patwari/Amin/Lekhpal,
3. Panchayat Secretary,
4. Village Level Workers,
5. Electricity Bill Readers,
6. Postman,
7. Auxiliary Nurses & Mid-wives,
8. Health workers,
9. Mid-day meal workers,
10. Contract teachers,
11. Corporation Tax Collectors,
12. Clerical Staff in Urban area (UDC/LDC etc.)
CEOs should instruct all DEOs that they take utmost care while deploying semi government
employees as BLO. Credentials of these workers should be verified thoroughly to ensure
that they do not have any political allegiance. 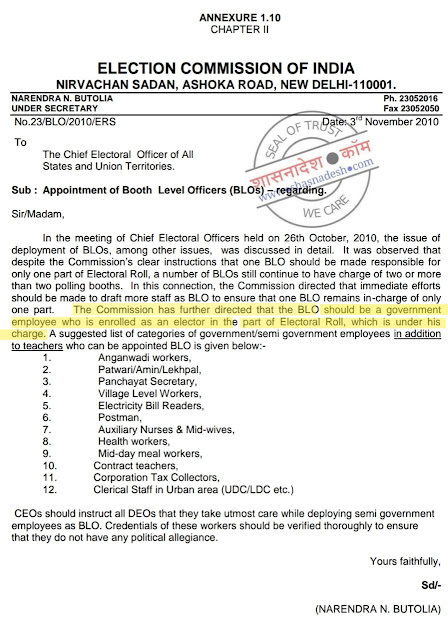