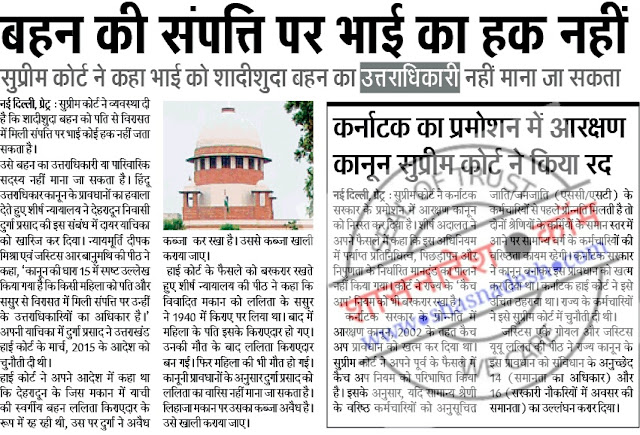 IN THE SUPREME COURT OF INDIA

the writ petition and  also  the  review  petition,  thereby  affirming  the

findings of Additional District and Sessions Judge-VII,  Dehradun  that  the

2.    Brief facts which led to filing of these appeals are as under :

The respondent-landlord filed an  eviction  petition  before  the  Competent

Baldev, Lalita became the tenant of suit property.   The  appellant  is  the

brother of deceased Lalita, who was the tenant  of  the  respondent  herein.

The application was dismissed vide order dated 19.04.2010 by the  Prescribed

Authority. Aggrieved by the said  order,  respondent-landlord  preferred  an

court which was transferred  to  Additional  District  Judge-VII,  Dehradun.

06.07.2013. The respondent-landlord moved a substitution application  before

the appellate court with a prayer  that  the  appellant,  who  is  the  real

brother of deceased, be substituted in her place. The said  application  was

Lalita passed away and Durga Prasad, who  has  been  substituted  is  not  a

previously residing with his sister Lalita in the said  premises.  On  those

findings  the  appellate  court  set  aside  the  order  of  the  prescribed

authority and allowed the appeal. Thereafter the appellant-tenant  preferred

3.    Mr. Parthiv Goswami, learned counsel for the appellant contended  that

contrary to the materials on record. Learned counsel further submitted  that

on the death of the tenant  Lalita,  respondent-landlord  himself  filed  an

filing of the application was shown  as  the  same  disputed  property  i.e.

House No.6/7, Amrit Kaur Road, Dehradun  and  which  by  itself  establishes

of tenant Lalita. The learned counsel for the appellant has placed  reliance

4.    Learned counsel for the respondent-landlord submitted  that  the  High

a member of the ‘family’ as defined under Section 3(g) of the U.P. Act  XIII

of 1972 and the appellant being an unauthorized  occupant,  the  High  Court

rightly ordered to be evicted. It was further contended that the  tenant  of

death, the devolution of tenancy will be determined as per Section  15(2)(b)

orders do not warrant interference.

5.    We have carefully considered the rival  contentions  and  perused  the

impugned order and the materials on record.

6.    The question for consideration is  whether  the  appellant-brother  of

7.    For proper appreciation of the question and  the  contentions  raised,

it is apposite to refer to relevant provisions of Section 3 of the U.P.  Act

is payable, and on the tenant’s death-

in the case of a residential building, such only of his  heirs  as  normally

resided with him in the building at the time of his death;

in the case of a non-residential building, his heirs;

not be deemed to be a tenant];

(g) “Family”, in relation to a landlord or tenant of a building  means,  his

(iii) such parents, grandparents and any unmarried or  widowed  or  divorced

or judicially separated daughter or daughter of a  male  lineal  descendant,

as may have been normally residing with him or her,

and includes, in relation to a landlord, any female having a legal right  of

residence in that building.”

of a building which reads as under:-

“12. Deemed vacancy of building in certain cases – (1) A landlord or  tenant

(a)  he has substantially removed his effects therefrom; or

not member of his family; or

(2) In the case of non-residential building,  where  a  tenant  carrying  on

deemed to have ceased to occupy the building.

(3) In the case of a residential building, if the tenant or  any  member  of

area in which the building under tenancy is situate, he shall be  deemed  to

have ceased to occupy the building under his tenancy:

9.    A careful analysis of the above  provisions  indicates  that   Section

contingency when a tenant dies.  It is significant to  note  that  the  word

situation of an existing tenant.  The definition of  ‘family’  as  occurring

question as to who would become tenant on  the  death  of  original  tenant,

since Section 3(a) uses the word ‘heir’.

become ‘tenant’ on the death of Lalita.  Hence, the definition  of  ‘family’

tenant on the death  of  tenant  Lalita.   The  only  question  falling  for

not defined in the Act.  ‘Heir’ is a person who inherits or may  inherit  by

property of an intestate under this Act;”. The word ‘heir’ has to  be  given

the same meaning as would be applicable to the general  law  of  succession.

In the present case, as pointed out by the High Court, the deceased  tenant-

Lalita being a hindu female, the devolution of tenancy  will  be  determined

under Section 15 of the Hindu Succession Act.

11.   Section 15 of the Hindu Succession Act lays down the general order  of

commencement  of  the  Hindu  Succession  Act  and  states  the  scheme   of

succession to the property of a male intestate. Sub-section (2)  of  Section

15 carves out two exceptions to the general scheme and order of  succession.

the general order of succession to  the  property  of  a  female  intestate.

Section 15(2)(b) of the Hindu Succession Act reads as under:-

“Section 15. General rules of succession in the case of female Hindus

Notwithstanding anything contained in sub-section (1),-

(b). Any property inherited by a female Hindu from her husband or  from  her

father-in-law shall devolve, in the absence of any son or  daughter  of  the

deceased (including the children of any predeceased  son  or  daughter)  not

therein, but upon the heirs of the husband.”

father-in-law; but its operation is  confined  to  the  case  of  her  dying

inherit her property.  Language used in the section clearly  specifies  that

property.   We may usefully refer to the decision of this Court in the  case

female dying intestate without  leaving  son,  daughter  or  children  of  a

predeceased son or daughter. In such a case, the rule prescribed is to  find

inherited from  her  father  or  mother,  it  would  devolve  as  prescribed

father-in-law, it would devolve upon the heirs of her husband  under Section

15(2)(b). The clause enacts that in a case where the property  is  inherited

by a female from her father or mother, it would devolve not upon  the  other

heirs, but upon the heirs of her father. This would mean that  if  there  is

daughter, then the property would devolve upon  the  heirs  of  her  father.

or her mother, neither her husband nor his heirs would  get  such  property,

but it would revert back to the heirs of her father."

his death, his son Baldev (husband of Lalita)  became  tenant  of  the  suit

property.  Upon his death, Lalita became the tenant of  the  suit  property.

Upon death of Lalita, in terms of Section 15(2)(b) of the  Hindu  Succession

Act, in the absence of any son or daughter of deceased Lalita,  the  tenancy

would devolve upon the heirs of her husband.  Since the appellant  does  not

fall under the category of ‘heir’ of Lalita’s husband, the  tenancy  of  the

13.   Section 3(g) defines ‘family’, in relation to landlord which  includes

the spouse that is husband or wife of  a  person,  male  lineal  descendants

to be excluded as not forming part of the  family  of  landlord  or  tenant.

Therefore, sisters and brothers of landlord and  tenant  are  excluded  from

his/her family.  In the facts of present case, the appellant  being  brother

be read therein as the list has to be read and interpreted strictly.

14.   Assuming, for the sake of arguments that the appellant is an  heir  of

Lalita, for devolution of tenancy, on the death  of  Lalita,  the  appellant

building, in the event of death of a tenant, for  heirs  to  be  treated  as

tenant, the statute requires them to prove  that  they  have  been  normally

residing with the deceased tenant at the time of his/her death.    The  term

member residing with the tenant would succeed to the tenancy, but  only  the

heirs of  tenant  normally  residing  with  him/her.   The  words  “normally

and not temporarily.  The legislative intent appears to be that  only  those

occasionally.  In the present case, the appellant claims that  he  has  been

they were running.  The appellant being the brother of  deceased-Lalita  had

no reason to normally reside with his married sister.  Be it noted,  in  her

written statement filed in the release application, Lalita has  not  averred

taking care of her.  As rightly held by the Courts below,  Durga  Prasad  is

definition of ‘family’ as per Section 3(g) of the Act.

Sharma took the premises on rent in the year 1940.  After his death,  Lalita

Baldev’s death, Lalita become the tenant of the suit property.   During  the

pendency of the appeal before the First Appellate Court, Lalita  expired  on

application before the appellate court to substitute the  appellant  who  is

the real brother of deceased-Lalita.  On  that  application,  the  appellant

was impleaded as a defendant-respondent in the said appeal.  As pointed  out

‘wrongly’ substituted after the demise of his sister.   Merely  because  the

appellant has been substituted in the place of tenant-Lalita, the  appellant

cannot become a ‘heir’ who normally resided with the tenant Lalita.

16.   Learned counsel for the appellant placed reliance  on  Ganesh  Trivedi

(supra), wherein this Court found, as a matter of  fact,  that  brother  was

residing in the  tenanted  premises  and,  therefore,  tenancy  rights  will

of judgment which are reproduced as under:

“9. The brother of a tenant is not included in the definition  of  “family”.

However, the present one is not a case where the  tenant  Suraj  Prasad  had

premises to be occupied by his brother. Deo Narain, being the  real  brother

of late Suraj Prasad, the tenant, had come to stay with his brother and  was

residing along with him as such, even at the time of death of Suraj  Prasad.

during the lifetime of Suraj Prasad and a deemed vacancy  had  occurred.  On

the death of Suraj Prasad tenancy rights devolved on Deo  Narain,  he  being

the only heir. He too became a “tenant” within the meaning of clause (a)  of

Section 3. The decision of the High Court cannot, therefore, be faulted.

10. There is yet another reason why no interference with the impugned  order

of the High Court is called for. Shri  Upadhyay,  the  learned  counsel  for

that admittedly the sale  deed  executed  by  Jagdamaba  Prasad  Awasthi  in

favour of Ganesh Trivedi, the appellant, contains  recitals  to  the  effect

suit premises after the death of Suraj Prasad, that he was  acknowledged  by

the landlord as tenant in the premises, and that rent was also paid  by  Deo

premises in favour of the  appellant.  Such  admissions  made  by  Jagdamaba

Prasad Awasthi are binding on Ganesh Trivedi,  the  appellant,  inasmuch  as

the previous owner-landlord. Deo Narain’s status as tenant in occupation  of

the suit  premises,  cannot,  therefore,  be  doubted  or  disputed  by  the

said case and, therefore, has no application to the  facts  of  the  present

17.   Upon appreciation of the  facts  and  evidence,  the  first  appellate

to be evicted.  The High Court has directed the District Magistrate to  pass

release application of the landlord without further delay preferably  within

1940.  In the facts and circumstances of the case,  without  relegating  the

of the respondent-landlord, we deem it appropriate to direct  the  appellant

to hand over vacant possession to the respondent-landlord.

18.   In the result, the appeals are dismissed.  We direct the appellant  to

appellant shall be liable for contempt of this Court.