SPECIAL APPEAL DEFECTIVE No. - 54 of 2016
***
State Of U.P. And 4 Others
Vs.
Satya Deo Pandey And 4 Others
Appearance:
For the petitioner:
Rama Nand Pandey
For the respondent:
Lallan Prasad Singh


B. Objection based on Chapter II Regulation 22:

Regulation 20 falling under Chapter II of the Regulations framed under the 1921 Act reads as follows:
"20. जहाँ प्रबन्ध समिति इस अध्याय में दिए गए विनयमों के अनुसार किसी ऐसे स्वीकृत पद को जो, रिक्त हो गया हो, ऐसी रिक्ति होने के दिनांक से तीन मास की अवधि के भीतर विज्ञप्ति नहीं करती है तो ऐसा पद अभ्यर्पित कर दिया गया समझा जायेगा और तब तक नहीं भरा जायेगा जब तक कि निदेशक द्वारा उसका सृजन फिर से स्वीकृत न कर दिया जाये।"
On a plain reading of the said provision, it is apparent that the obligation placed upon the management is to "advertise" a substantive vacancy within three months of its coming into existence. Regulation 20 does not place an obligation on the management to effect or make an appointment within three months. The order dated 7 July 2005 faults the appointment of the original petitioners on the ground that they were made almost a year after the creation of the vacancy. This is not the mandate, command or interdict comprised in Regulation 20. Evidently therefore the ground which weighed with the appellants while proceeding to annul the claim of the original petitioners is unsustainable.
Additionally, it may be noted that it is not the case of the appellants that the procedure prescribed under the 1981 Order was not followed by the management. Moreover, it may be noted that in terms of clause 5 of the 1981 Order, the duty and obligation cast on the management is to inform the District Inspector of Schools about the details of the vacancy. It is thereafter the obligation of the District Inspector of Schools to invite applications from the local employment exchange and to issue a public advertisement. The onus to advertise the vacancy is not placed upon the management. More importantly, the provisions of the 1981 Order lay down a special procedure, distinct from the provisions of the 1921 Act, for the management to follow while making ad hoc appointments in certain contingencies. We are therefore, of the view that the provisions of Regulation 20 falling in Chapter II can even otherwise have no bearing on an appointment made by the management under the 1981 Order.
C. The impact of Section 12 of the 1971 Act on the decree dated 5 May 1983 and 25 July 1986:

This then takes us to the submission that the decree of the civil Court would not bind the appellant by virtue of the provisions of Section 12 of the 1971 Act. Section 12 of the 1971 Act reads as under:
"12. No order made direction given by the State Government, the Director, the Regional Deputy Director, Education, or the Inspector or other officer in exercise of any power conferred by or under this Act shall be called in question in any Court."

A plain reading of the provision indicate that it is in the nature of a finality clause which shields any order or direction made by the State Government, the Director, the Regional Deputy Director of Education or the Inspector from scrutiny by any Court. While it cannot be disputed that Section 12 would not oust the constitutional jurisdiction of this Court conferred by Article 226, the issue which arises for determination is whether this provision would also oust the jurisdiction of the Civil Court and if so to what extent.
The jurisdiction of the civil Court conferred by Section 9 of the Code of Civil Procedure is, as has been consistently held, liable to be construed based upon the maxim ubi jus ibi remedium. Every grievance of a civil nature is liable to be placed by a litigant for redressal before a civil Court unless its cognizance is either expressly or impliedly barred. The language of Section 9 confers upon the civil Court an expansive jurisdiction over all causes of a civil nature unless the cognizance thereof is barred by statute either expressly or by necessary implication. The second principle which must be borne in mind while dealing with the submission is that an exclusion of the jurisdiction of the Civil Court is not to be readily inferred. In Dhulabhai Vs. State of M.P.5 a Constitution Bench of the Supreme Court considering the impact of a finality clause held that where a statute confers finality to orders, the jurisdiction of the civil courts must be held to be excluded. This statement of the law, however, was made subject to the rider that the statute creating the authority or the tribunal whose orders had been conferred finality providing sufficient and adequate remedies of redressal. The more significant principle which was laid down was the test of whether the claim was based upon a right or obligation created and conferred by the statute itself or whether it was based upon a common law right. Such a provision, the Constitution Bench held, would not oust the jurisdiction of the civil Court in cases where the provisions of the particular Act have not been complied with or where the order which is ordained to have attained finality has come to be made in violation of "fundamental principles of judicial procedure". It would be relevant to recall that the civil Court in the present case proceeded to declare the order dated 26 March 1982 a nullity on the ground that the order of approval had been revoked by the DIOS in violation of the principles of natural justice and without affording an opportunity of hearing to the original petitioners. The learned Single Judge while holding against the appellants has held that no case of fraud or misrepresentation stood established against the original petitioners. These findings have not been questioned before us in this appeal. The question which therefore, arises is whether in this background whether the jurisdiction of the civil Court was barred when it proceeded to consider a challenge to the order dated 26 March 1982.
It is by now well settled that the principles of natural justice are an integral part of the constitutional scheme of a just and fair procedure as envisaged under Article 14. This was so held by a Constitution Bench of the Supreme Court in Sarojini Ramaswami Vs. Union of India & others6. Considering this very aspect namely a challenge to an order made in violation of constitutional or statutory provisions and the jurisdiction of the civil court in respect thereof fell for consideration before the Supreme Court in Rajasthan State Road Transport Corporation and another Vs. Bal Mukund Bairwa7. Three learned Judges of the Supreme Court while reiterating the principles laid down in Dhulabhai as well as Premier Automobile Ltd. held that violation of the principles of natural justice and actions which are unreasonable and arbitrary would fall within the ambit of Article 14. Their Lordships proceeded to hold that where the action instituted before the civil Court relates to the enforcement of constitutional rights or a right flowing from the common law, the civil Court would necessarily have jurisdiction regardless of the finality clause that may stand engrafted in the statute. We may usefully refer to what the Supreme Court held in this respect in Rajasthan State Road Transport Corporation.
"36. If an employee intends to enforce his constitutional rights or a right under a statutory Regulation, the civil court will have the necessary jurisdiction to try a suit. If, however, he claims his right and corresponding obligations only in terms of the provisions of the Industrial Disputes Act or the sister laws so called, the civil court will have none. In this view of the matter, in our considered opinion, it would not be correct to contend that only because the employee concerned is also a workman within the meaning of the provisions of the 1947 Act or the conditions of his service are otherwise governed by the Standing Order certified under the 1946 Act ipso facto the Civil Court will have no jurisdiction. This aspect of the matter has recently been considered by this Court in Rajasthan State Road Transport Corporation & ors. vs. Mohar Singh [(2008) 5 SCC 542]. The question as to whether the civil court's jurisdiction is barred or not must be determined having regard to the facts of each case.
37. If the infringement of Standing Order or other provisions of the Industrial Disputes Act are alleged, the civil court's jurisdiction may be held to be barred but if the suit is based on the violation of principles of common law or constitutional provisions or on other grounds, the civil court's jurisdiction may not be held to be barred. If no right is claimed under a special statute in terms whereof the jurisdiction of the civil court is barred, the civil court will have jurisdiction.

48. In a case where no enquiry has been conducted, there would be violation of the statutory Regulation as also the right of equality as contained in Article 14 of the Constitution of India. In such situation, a civil suit will be maintainable for the purpose of declaration that the termination of service was illegal and the consequences flowing therefrom. However, we may hasten to add if a suit is filed alleging violation of a right by a workman and a corresponding obligation on the part of the employer under the Industrial Disputes Act or the Certified Standing Orders, a civil suit may not lie. However, if no procedure has been followed as laid down by the statutory Regulation or is otherwise imperative even under the common law or the principles of natural justice which right having arisen under the existing law, sub-para (2) of paragraph 23 of the law laid down in Premier Automobiles Ltd. shall prevail."

The assertion of the original petitioners before the civil Court that the order of approval could not have been recalled by the District Inspector of Schools without complying with the principles of natural justice was not an assertion based, dependent upon or flowing from any right, obligation or liability placed by the 1971 Act. The right of hearing and a prior opportunity was an assertion of a constitutional right and based upon their right to a fair and just procedure being followed before the appointment was cancelled. It was not a right which flowed to them by virtue of the provisions of the 1971 Act. In this view of the matter, it cannot be said that the jurisdiction of the civil Court stood ousted in the facts of the present case. In light of the above, we find ourselves unable to accept the submissions of the appellants advanced on this score. The submission urged by the learned counsel for the appellants that the decree of the civil Court was without jurisdiction and therefore, a nullity cannot, therefore, be accepted.
For all the aforesaid reasons, we find no error in the judgment rendered by the learned Single Judge. The special appeal shall accordingly stand dismissed.
Order Date :- 01.04.2016
LA/-
(Dr D Y Chandrachud, CJ)

The delay of 287 days in filing the special appeal is condoned since sufficient cause has been shown in the Affidavit filed in support of the application for condonation of delay.
The application stands disposed of. There shall be no order as to costs.
Order Date :- 01.04.2016
LA/-
(Dr D Y Chandrachud, CJ) 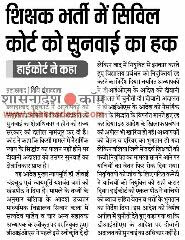